How Farah Got 300 Interview Requests From Linkedin

Today I’m sharing the story of Farah, who received 300 messages for interview, after getting retrenched from her company. All of these opportunities came from Linkedin.

I’m a massive fan of Linkedin. Most people don’t yet realise how to correctly use it to propel your career forward.

Here’s how she got 300 interview messages 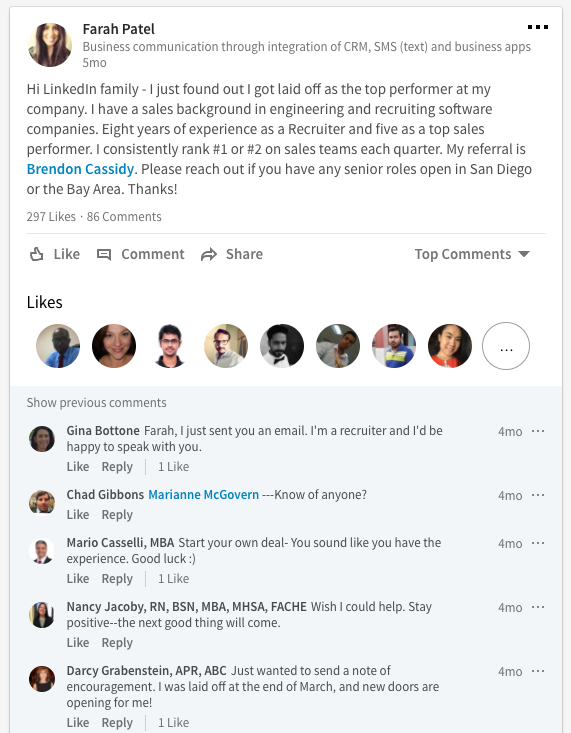 In case the image above doesn’t load, here’s what Farah posted on LinkedIn:

“Hi LinkedIn family – I just found out I got laid off as the top performer at my company. I have a sales background in engineering and recruiting software companies. Eight years of experiences as as Recruiter and five as a top sales performer. I consistently rank #1 or #2 on sales teams each quarter. My referral is Brendon Cassidy. Please reach out to me if you have any senior roles open in San Diego or the Bay Area. Thanks!”

That post (plea) on Linkedin received thousands of likes, and hundred of comments.

Farah was a star. She was in demand.

And then, 3 months later, she posted this: 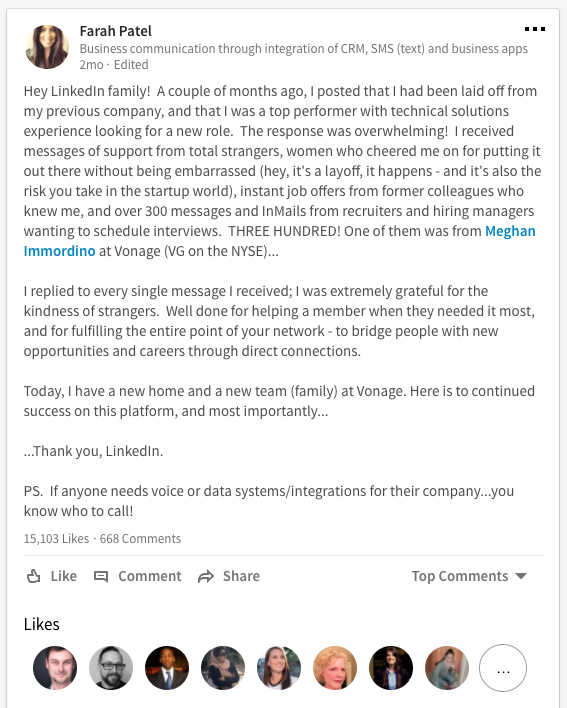 In case the image above doesn’t load, here’s what Farah posted on LinkedIn 3 months later:

“Hey Linkedin Family! A couple of months ago, I posted that I had been laid off from my previous company, and that I was a top performer with technical solutions experience looking for a new role. The response was overwhelming! I received messaged of support from total strangers, women who cheered me on for putting it out there without being embarrassed (hey, it’s a layoff, it happens – and it’s also the risk you take in the startup world), instant job offers from former colleagues who knew me, and over 300 messages and InMails from recruiters and hiring managers wanting to schedule interviews. THREE HUNDRED! One of them was from Meghan Immordino at Vonage (VG on the NYSE)…

I replied to every single message I received; I was extremely grateful for teh kindness of strangers. Well done for helping a member when they needed it most, and for fulfilling the entire point of your network – to bridge people with new opportunities and careers through direct connections.

Today, I have a new home and a new team (family) at Vonage. Here is to continued success on this platform, and most importantly…

Are you using LinkedIn to it’s full potential?